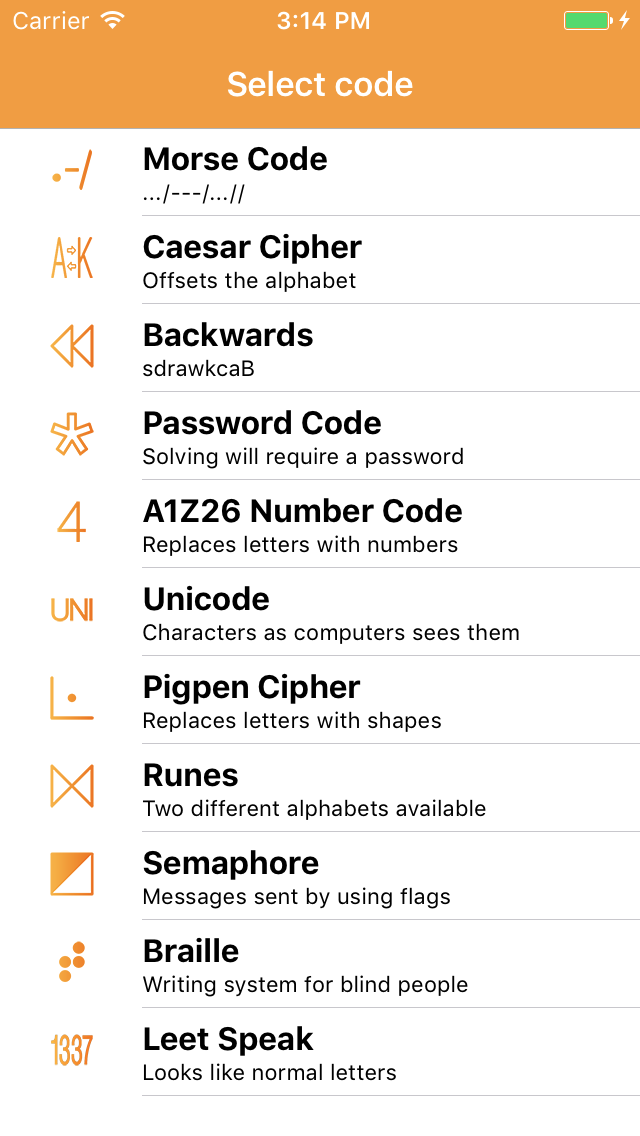 This code translator can be used to translate normal text into a lot of different codes, and many of these codes can also be translated back into text. Each code supports up to 10 different languages!

The following codes can be translated both ways:

Additionally, the app can translate into the following codes:

In addition to the automatic translation, a lot of the codes also has an option to display how to manually perform translation. An explanation of how each code works is also included.

The app is universal and will run on both iPhone and iPad. It’s optimized to all the new iOS screen sizes, and it even supports split screen multitasking on the new iPad models!

It’s possible to share the translated results using SMS, iMessage, Mail, Twitter, AirDrop etc. The image type codes will be converted into PDF files, ready to print and share. If your device has a flashlight, it’s even possible to make it flash using the Morse Code results!

All codes are translated locally on the device which means that no data connection is required.

For each of the codes there’s a variety of settings available, enabling you to adjust how the app should perform the translations.

The display language of the app is currently either English, Danish, German or Spanish (based on the language of your device), and all the codes will support the following 10 languages with only a few exceptions (mentioned at the bottom of this description): 🇨🇿Czech, 🇩🇰Danish, 🇩🇪German, 🇺🇸English, 🇫🇷French, 🇮🇹Italian, 🇳🇴Norwegian, 🇪🇸Spanish, 🇷🇺Russian and 🇸🇪Swedish.

The language support exceptions are as follows: